Protect the Adirondacks is very concerned about efforts underway by the Department of Environmental Conservation (DEC) to open new areas of the “forever wild” Forest Preserve to use by All Terrain Vehicles (ATVs). In our view, this would be a grave mistake because of the enormous damage to natural resources that ATVs inflict and the longstanding failure of the DEC to control illegal ATV use on the Forest Preserve. PROTECT believes that ATV riding is an intensive and abusive recreational activity that should be relegated to private parks, such as the sport of motocross racing, and on industrial forestlands where the state has purchased conservation easements, which have an adequate maintained road network.

Unfortunately, ATV management is a political hot potato. After the road closures in 2003, Governor George Pataki moved in 2005 to promulgate a draft DEC Commissioner’s Policy for ATV use on all state lands. This policy was never finalized, though it did undergo a statewide public hearings. Governors Eliot Spitzer and David Paterson did not act on ATV use, though widespread abuse has continued. Now, it is PROTECT’s understanding that the DEC has updated the Pataki-era draft Commissioner’s Policy on ATV use on public lands in New York and is considering releasing a policy for public hearing that allows widespread ATV use on the Forest Preserve and other state lands.

This would be a grave mistake. 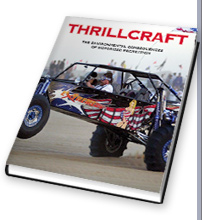 Recently, PROTECT provided a letter opposing opening the Forest Preserve to ATV use and copies of Thrillcraft: The Environmental Consequences of Motorized Recreation, to Governor Cuomo and DEC Commissioner Joe Martens. This book is one of the best showcases of the numerous failures around the U.S. to control abusive motorized uses on public lands. At the time Thrillcraft was published in 2007, the Adirondack Park was seen as the country’s sole success story for protecting public lands from the ravages of motorized access based on its 2003 actions to close scores of roads on the Forest Preserve illegally opened to ATVs.

Sadly, it appears that New York is no longer to be upheld as a success story.

PROTECT also re-issued and gave the Governor and DEC Commissioner copies of Rutted and Ruined: ATV Damage on the Adirondack Forest Preserve, a 2003 report that pushed the state to close the Forest Preserve to ATVs. PROTECT has republished this report for Adirondack Park policymakers. This report documented the many ways that ATV use abuses natural resources. In short, as the ATV published in Rutted and Ruined state, these powerful machines are built to make the mud fly.

ATV Use on the Adirondack Forest Preserve: An Experiment that Failed

In the 1990s, ATV use on the Forest Preserve was allowed. This was not done through a centralized plan, but rather through disparate regional actions. No policy assessment had been done and certainly no environmental impact assessment was completed. As a result scores of roads and trails were illegally opened in the Forest Preserve for public ATV use.

In 2003, a special report was published about the ecological damage caused by ATV use entitled Rutted and Ruined: ATV Damage on the Adirondack Forest Preserve. This report catalogued ATV abuse of roads, trails and natural resources on the Forest Preserve, but also showed the way that ATV riders use public lands that is different from other recreational uses. These findings included the following observations.

1. ATV use destroys road and trail surfaces and Forest Preserve facilities, such as bridges, and cause soil and wetlands damage in ways that other motor vehicles do not.

2. ATV use creates deep ruts and mud pits on roads and trails that become impassable. It seems that ATVs are often ridden for the backwoods riding experience where one can make the mud fly and tear up an area. This damage makes a road difficult to travel for all other users.

3. Roads and trails are widened by ATV users to avoid a damaged, impassable area, which causes further damage to the corridor’s natural resources and wild character.

6. ATVs regularly trespass around gates and boulders that are erected to control motor vehicle traffic. ATVs can blaze trails through the forest to circumvent barriers in ways that other motor vehicles cannot.

7. ATVs regularly drive through streams, creeks and wetlands for sport rather than use bridges that provide motor vehicles with access over a stream, creek or wetland.

8. ATVs regularly trespass on snowmobile trails, designated roads that prohibit ATV use, and footpaths that intersect with roads. In short, ATV operators often go where they want.

9. ATV use has led to vandalism of Forest Preserve facilities, such as gates that control access.

Below are a series of pictures from areas that had been heavily abused by ATVs.

The pictures above show how ATV use damages natural areas. These machines are designed and built to punish wild areas. The sport of ATV riding is suited only to private parks or industrial forest lands with an extensive engineered road system. ATV use is a specialized, intensive activity analogous to motocross racing and downhill skiing where specifically created facilities are required to support this sport.

After opening significant acreages of public lands to ATV use in the late 1990s, the State of Vermont vastly reduced the areas where ATVs are allowed on public lands. The state the re-opened very limited areas, but now after considerable damage, the state is working to close many of these areas. Vermont also passed statewide legislation that fully regulated operation of ATVs on all public and private lands in the state and set penalties for violations.

Similar to the Vermont experience, Massachusetts opened dozens of miles of state forests to ATV use, but has since sharply limited the number of trails due to extensive trail damage. Massachusetts has since embarked upon a new program to use ATV registration funds to purchase areas that will be used solely for ATV use.

Genuine Disabled Access via ATV is already Successfully Allowed; Disabled Use of ATVs Should be the Only Public ATV Use Allowed on the Forest Preserve

Many call upon the state to allow ATV use to provide access to wild areas for the disabled community, arguing that ATVs are in essence “wheelchairs in the woods.” The DEC studied this issue extensively in the late 1990s and developed a Commissioner’s Policy and a full program for disabled access through use of ATVs. Dozens or opportunities have been provided for legitimate disabled individuals access to designated remote and wild areas under a state permit system that authorizes limited ATV use. This program has been successful and has been widely supported by the environmental community. Further public ATV use is not needed to provide access for the disabled community because a successful program already exists for legitimate disabled access.

Commissioner’s Policy is Not the Right Vehicle for Regulating ATV on Public Lands; DEC should Promulgate Official Rules and Regulations

PROTECT is concerned about conversion of snowmobile trails to ATV networks in the Forest Preserve. The DEC and APA have recently begun building a robust snowmobile trail network of wide road-like trails. Given the uneven winter snow trends in the era of climate change, this network will see less and less actual snowmobile use, which will create a drumbeat for transition to ATV use. For all the reasons detailed above and in the enclosed publications, PROTECT sees this as a misguided policy.

There is no place for ATVs in the public Forest Preserve because they damage natural resources. The State of New York has invested heavily in purchasing over 750,000 acres of conservation easements in the Adirondack Park. These are managed timberlands with hundreds of miles of roads used by large trucks and heavy equipment. These road networks makes conservation easement lands suitable for ATV use. One of the reasons for state purchase of easement lands was to expand recreational opportunities that are not suitable for the Forest Preserve.